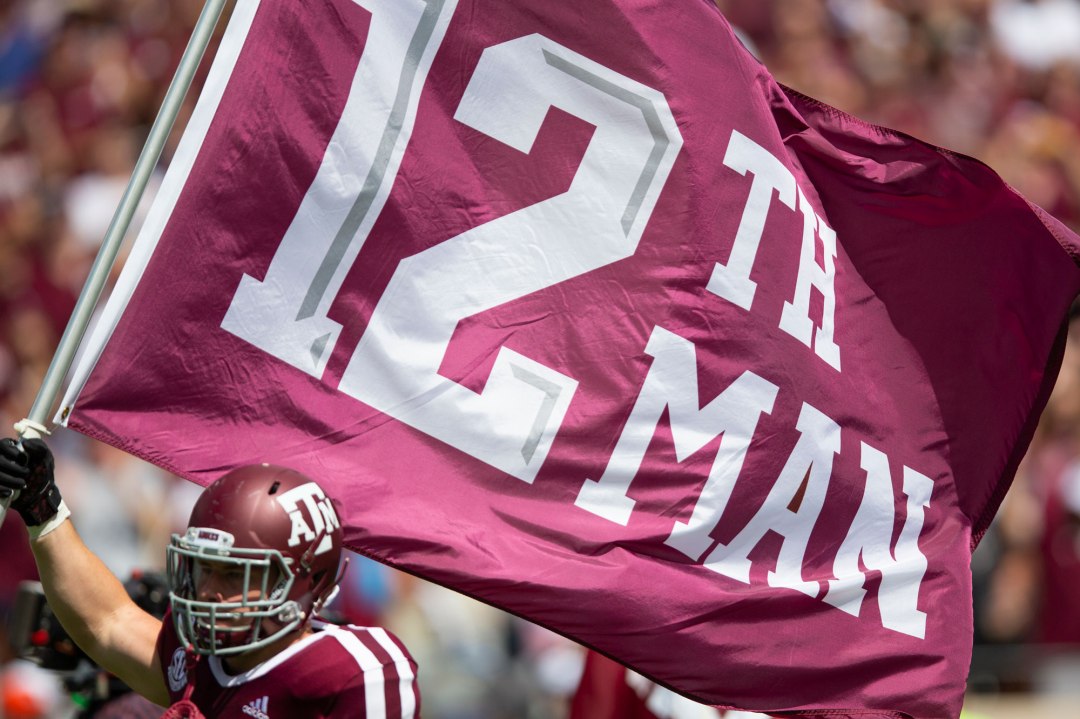 Jimbo Fisher is coming off his best season at Texas A&M going 9-1 with the only loss being to eventual National Champion, Alabama. The Aggies will have a large hole to fill on offense as four year starting quarterback, Kellen Mond, is off to the NFL. He threw for over 9,600 yards, threw for 71 touchdowns, and ran in 22 touchdowns as well. The Aggies have been recruiting well and should have viable replacements ready for the players have departed for the NFL. Let’s jump into it!

Sept 4, Kent State: As is tradition with many teams, Texas A&M will have a tune up game. Kent State is not a team to slouch on as head coach Sean Lewis appears to be turning the program around. The Golden Flashes only played four games, but scored more than 60 in two of them and scored 41 in another. Kent State can score, but the defense needs addressed. The Aggies will look to either QB Haynes King or Zach Calzada to take over for Mond. King threw four passes last year and is the presumed leader for the job. The game vs Kent State will be a good opportunity for game repetitions and to build chemistry with his receivers. Prediction: 52-20 Texas A&M

Sept 11, @ Colorado: The Buffaloes surprised a lot of people last year going 4-2 including a loss to Texas in their bowl game. RB Jarek Broussard ran for 895 yards in only six games including a 301 yard game against Arizona. He returns for Colorado and should be the main play maker for them. Traveling on the road with a young quarterback this early in the year can occasionally make for close games and potential upsets. RB Isaiah Spiller returns for the Aggies and look for Jimbo Fisher to utilize his veteran running back to help out the young quarterbacks. WR Chase Lane is the leading receiver returning after have 409 yards in 2020. Experience will be crucial for a road game this early. Prediction: 31-23 Texas A&M

Sept 18, New Mexico: New Mexico started off the season 0-5 before winning their last two games over Wyoming and Fresno State. The Aggies should be able to make easy work of New Mexico and have the backups in after the half. Look for young players to carve a role out in this game such as WR Demond Demas. The former five star wide receiver only played in three games in 2020 and will look to increase his production with limited playmakers ahead of him. The Aggies return a large chunk of their defense including the entire secondary. The area of concern will be the defensive line. This is game where they should flex their muscles and allow very few points. Prediction: 45-10 Texas A&M

Sept 25, Arkansas: Arkansas may have went 3-7 last year, but they were much improved from 2019. Their losses to Auburn, Missouri, and LSU were by a combined seven points. When Texas A&M played Arkansas, the Aggies only won by 11. While they did make improvements, Arkansas still finished 99th in points allowed and 86th in points per game. I expect them to improve in 2021, but not enough to top the Aggies. Texas A&M still has too much talent on the team. Expect the game to be close once again, but the Aggies pull it out. Prediction: 35-24 Texas A&M

Oct 2, Mississippi State: Mike Leach was thought to be off to a good start at Mississippi State, but his team finished 4-7, going 3-7 in the regular season. His team struggled to score points being shut out by Alabama and only scoring two points against Kentucky. Year two under Leach should see some improvements, but once again, not enough to upend the Aggies. With the amount of turnover on the defensive line, Jimbo Fisher could look to rotate in freshman DT Shemar Turner and DE Tunmise Adeleye. Turner was a five star prospect and Adeleye was a high four star prospect ranking 38th overall. Prediction: 38-17 Texas A&M

Oct 9, Alabama: Based on my predictions, Texas A&M will come into the Alabama game 5-0 and potentially ranked in the top 5. Alabama lost a fair amount of players from their National Championship team including Heisman Trophy winner WR DeVonta Smith, QB Mac Jones, RB Najee Harris, and a plethora of other players heading to the NFL. Unfortunately for Texas A&M, Alabama will still be loaded with talent next year. You can read the Alabama preview here. This could be the Aggies best chance against the Crimson Tide in a few years. With the game being played at Kyle Field, the Aggies chances improve, but not enough to pull the upset. Prediction: 34-21 Alabama

Oct 16, @ Missouri: In Eli Drinkwitz first season as the Tigers head coach, he went 5-5 with a number of peaks and valleys. QB Connor Bazelak showed flashes complete over 67% of his passes in his first year starting. Missouri has the ability to be a dangerous team in 2021 because of their ability to score points. They struggled to score consistently in 2020 but if they can fix the issues, they could have one of the better offenses in the SEC. While I do like Bazelak as a quarterback, his best games were against the worst defenses in the SEC. Since I expect the Aggie’s defense to once again be one of the best in the SEC, I am taking the Aggies to win. Prediction: 27-20 Texas A&M

Oct 23, South Carolina: Shane Beamer heads to South Carolina to replace Will Muschamp and we are really not sure what we are going to see from his team. South Carolina struggled to score and to stop teams. While I expect improvements, it is hard to image they will improve enough to contend in the SEC East. QB Ryan Hillinksi transferred to Northwestern meaning QB Luke Doty is expected to start. Doty only threw 71 passes in 2020 and could face competition if he does not preform in practice or games. This may be the easiest SEC game for the Aggies next season. Prediction: 45-17 Texas A&M

Nov 6, Auburn: Similar to South Carolina, Auburn is also replacing their coach. Luckily for Bryan Harsin, he is walking into a much better position. He will be looking to get the most out of QB Bo Nix after a disappointing career thus far. Auburn also has the luxury of returning starting RB Tank Bigsby after rushing for 834 yards and five touchdowns last year. Harsin will be looking to make a splash in his first year, and beating Texas A&M would make the list. The problem for him is the game is played at Kyle Field. If the game was at Jordan-Hare Stadium, I would feel confident Auburn could pull the upset. Overall, this will be a close game. I believe Harsin will tap into Bo Nix potential and we will see an improvement from him in 2021. Prediction: 33-30 Texas A&M

Nov 13, @ Ole Miss: Lane Kiffin has the potential to have a very good team next year. QB Matt Corral returns after throwing for 3,300 yards and rushing for another 500. Ole Miss ranked 14th in scoring offense but 117th in scoring defense. Another year plus spring practice should help the defense improve. Ole Miss will have one of the top three offenses in the SEC next year. If they can have a top half of the SEC defense, they will win a lot of games. With the game being played on the road at Ole Miss, I do not think Texas A&M will be able to go score for score. Jimbo Fisher’s offense ranked 19th in 2020 and I expect it to take a step back. Prediction: 38-28 Ole Miss

Nov 20, Prairie View A&M: I am going to use this paragraph to rant about SEC teams playing FCS teams in November. It is stupid, no one wants to watch the games. Just play conference games this week. I do not understand it, and no one has ever given me a good reason why they should play cupcakes in November. The argument that the SEC is just harder and they deserve a bye week is useless. Prediction: A billion to 6 Texas A&M

Nov 27, @ LSU: LSU was just bad in 2020. To only go 5-5 with an atrocious defense led by Bo Pelini is actually an incredible feat. LSU started three different QBs and had players opt out left and right. Max Johnson or Myles Brennan are presumed to start at QB in 2021. Johnson helped the Tigers beat Florida in the infamous shoe game. LSU should expect to bounce back in 2021 because they have talent, they replaced their defensive coordinator, and will not have as much roster turnover. Look for LSU to end the season ranked. With the game being played in Death Valley, I give LSU the edge. The Aggies have not won in Baton Rouge since joining the SEC and I do not expect that to change next year. Prediction: 27-23 LSU

Analysis: Overall, Texas A&M finishes 9-3 which may be viewed as a disappointment to some fans. The Aggies will almost certainly take a small step back because of some sizable departures from the team. The the way Texas A&M is recruiting, they should have building blocks for the foreseeable future making them a force to be reckoned with in the SEC West. The biggest factor to the Aggies success will be centered around the quarterback play. If the next quarterback can have similar success to Kellen Mond, they could see the win total rise.