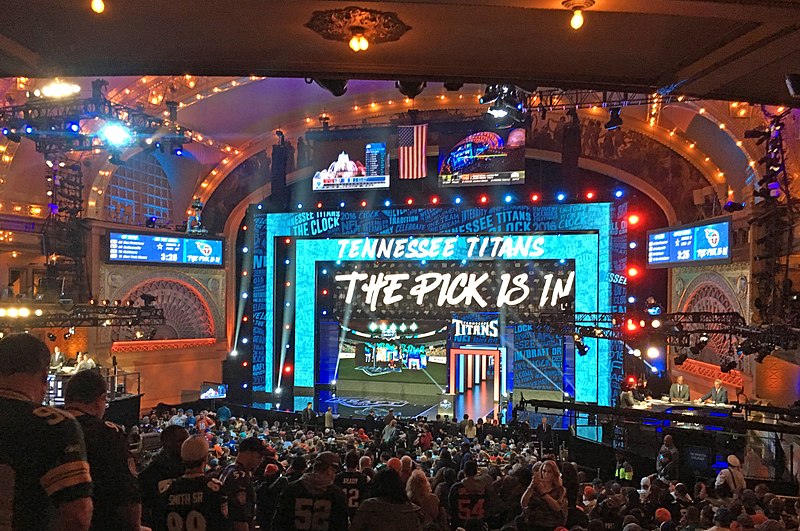 1 – Jacksonville Jaguars select Evan Neal (OT, Alabama) – For once, the top of the NFL Draft is a crapshoot with no guarantees of which prospects will go in the top 5. Jacksonville will have a tough decision on whether they take an offensive tackle or pass rusher at number one. I’m giving them Evan Neal, the athletic freak from Alabama. A staple of Doug Pederson’s time in Philadelphia was the exceptional offensive line play, which is vital to help Trevors growth.

2 – Detroit Lions select Aidan Hutchinson (EDGE, Michigan) – Detroit obviously needs a true franchise quarterback, but it would be a mistake to pass on a blue chip talent at this pick in favor of a risky gamble. Hutchinson is the home grown talent and has the on the field mentality that coach Dan Campbell loves. It’s a perfect match.

3 – Houston Texans select Kyle Hamilton (S, Notre Dame) – You don’t often see safeties going this high in the NFL Draft due to positional value, but you also don’t see many safeties who’s play is as diverse as Hamilton. As Houston continues to rebuild, Hamilton brings a perfect mixture of leadership, rangy athleticism, and a boomstick mentality that can make life hard on the AFC South.

4 – New York Jets select Ikem Ekwonu (OT, NC State) – The status of former first round pick Mekhi Becton appears to be up in the air, but either way, the Jets could use another premier offensive line prospect as they continue to try and build a wall around hopeful franchise quarterback Zach Wilson.

5 – New York Giants select Kayvon Thibodeaux (EDGE, Oregon) – Before the season, Thibodeaux was considered a lock to be the number one pick in the Draft. He should still see himself picked within the first five selections based on the importance of pass rush, but a year in which he dealt with nagging injuries could push him out of the first overall pick.

6 – Carolina Panthers select Malik Willis (QB, Liberty) – Carolina fans are running out of patiences with Matt Rhule and the front office as they’ve continued to do very little surrounding the quarterback position. Malik Willis has seen his draft stock both tank and spike in recent months, but a tremendous week at the Senior Bowl might put him in line to be the first QB off the board in late April.

7 – New York Giants (via CHI) select Trevor Penning (OT, Northern Iowa) – Andrew Thomas made gains in his second year with the Giants, but the G-Men are going to need more help on the other side of the line. Penning, like mentioned above with Willis, has had his stock rise from mid-late first rounder to potential top ten pick during his time in Mobile.

9 – Denver Broncos select Kenny Pickett (QB, Pittsburgh) – The Denver Broncos have one need this offseason, and it’s a big one: find a franchise quarterback. Should Aaron Rodgers shake free, Denver will be high on that list, but until then, we’ll give them the best one on the board in Kenny Pickett.

10 – New York Jets select David Ojabo (EDGE, Michigan) – After getting Ekwonu, the Jets turn around here and grab David Ojabo from Michigan, a pass rusher that some believe has a higher ceiling than his Wolverine teammate Aidan Hutchinson. Someone has to bring Josh Allen to the ground twice a year.

11 – Washington Commanders select Matt Corral (QB, Ole Miss) – Another QB off the board here in Matt Corral. Taylor Heineke has proven himself as a quality spot starter in the NFL, but if Washington wants to take advantage of a weak NFC East, it has to find a quarterback that can maximize the offensive talent Washington has in Terry McLauren and Antonio Gibson.

12 – Minnesota Vikings select Derek Stingley Jr (CB, LSU) – A bit of a fall here for Stingley, who’s off and on injuries have derailed a little bit of his draft hype. Still the most gifted corner in this class, he should find a nice home in Minnesota for a Vikings team in need of defensive back help.

13 – Cleveland Browns select Jordan Davis (IDL, Georgia) – The Browns are stuck in a weird spot. They should probably move on from Baker Mayfield, but without a good option at pick 13, they can push that off to next season and take Jordan Davis, the monstrous defensive tackle from the defending Champion Bulldogs.

14 – Baltimore Ravens select Travon Walker (EDGE, Georgia) – Walker is a prototypical Ravens defensive pick: an athlete who, with some good coaching to refine his game, can unlock another level of his game. His size also gives him the ability to move around on the defensive line.

15 – Philadelphia Eagles (via MIA) select Tyler Linderbaum (IOL, Iowa) – Jason Kelce will be turning 35 during the upcoming season, and with Philadelphia having three first round picks in this years draft, finding a suitable replacement is a must. Linderbaum is by far the best center prospect in this draft and garners some comps to Kelce’s game.

16 – Philadelphia Eagles (via IND) select Sauce Gardner (CB, Cincinnati) – Philadelphia would benefit from finding a standout corner to pair with Darius Slay, and Gardner has the potential to be the best corner in this class. Gardner is a great mix of height and fast feet that led to him allowing zero touchdowns during his collegiate career.

17 – Los Angeles Chargers select Charles Cross (OT, Mississippi State) – After drafting Rashawn Slater in 2021, the Chargers come back here to select another tackle to bookend the offensive line for Justin Herbert. Cross proved to be a stellar pass blocker in the Bulldog Air Raid offense, and if he can switch to the right side effectively at the next level, it could prove to be a steal of a pick.

18 – New Orleans Saints select Treylon Burks (WR, Arkansas) – The first wide receiver finally comes off the board and its the versatile Burks from Arkansas. New Orleans will be looking for a quarterback, but without a good one here, I’m giving them another position of great need. I’m a big fan of Burks game, and ability to be a true offensive weapon for a player of his size.

19 – Philadelphia Eagles select George Karlaftis (EDGE, Purdue) – Philadelphia steps back up to the podium for their third first round selection to take the big pass rusher from Purdue. With the Eagles pass rush in question due to age and free agency, it would be a smart move to grab someone to accompany Josh Sweat.

20 – Pittsburgh Steelers select Kenyon Green (IOL, Texas A&M) – With no available quarterback worth this selection, and Pittsburghs rumored desire to find a veteran replacement this offseason, the Steelers grab an versatile interior lineman who slipped down the board a bit in Kenyon Green.

21 – New England Patriots select Andrew Booth Jr (CB, Clemson) – After releasing Stephon Gilmore during the season and the impending free agency of JC Jackson, the Patriots will need to fill some gaps on the back end of the defense if they hope to keep close with Josh Allen and the Buffalo Bills moving forward.

22 – Las Vegas Raiders select Zion Johnson (IOL, Boston College) – The Raiders opted to move on from several high quality interior lineman the past few seasons, and could benefit from adding some fresh talent at the position. Johnson has risen up boards in the past few weeks and brings a tremendous work ethic.

23 – Arizona Cardinals select Trent McDuffie (CB, Washington) – The Cardinals took a Washington Huskie defensive back a few years ago with Budda Baker and its worked out really well, so now we have them going back to the drawing board for some outside help at the corner position.

24 – Dallas Cowboys select Devonte Wyatt (IDL, Georgia) – Wyatt is the best player available at this point, and helps sure up the interior on a Cowboys defense that played really well most of the season under Dan Quinn.

25 – Buffalo Bills select Roger McCreary (CB, Auburn) – The Bills go into the offseason with very few needs, but upgrading the corner position opposite Tre White would be a huge help for the Buffalo defense.

26 – Tennessee Titans select Devin Lloyd (LB, Utah) – Lloyd is an incredible athlete who can do most (if not all) that’s needed from the linebacker position. He plays with a really high motor and explosiveness, and is the type of player former linebacker Mike Vrabel would love to have on his roster.

27 – Tampa Bay Buccaneers select Jameson Williams (WR, Alabama) – This kind of value might bring Tom Brady out of retirement (I kid, please stay away Tom). Williams slips down the board a bit after tearing an ACL in the National Championship game, but with the Buccaneers seemingly moving on to last years second round pick Kyle Trask, and Chris Godwin heading to free agency, finding more offensive weapons is a must for Tampa.

28 – Green Bay Packers select Cameron Thomas (EDGE, San Diego State) – Another Draft riser, Thomas was a problem for other Mountain West offenses, both as a pass rusher and playing against the run.

29 – Miami Dolphins (via SF) select Chris Olave (WR, Ohio State) – The pair of Ohio State receivers are a toss up on who goes first, but Olave is my preference between the two as a more polished product. Much like DeVonta Smith last season, Olave plays tougher than his slender frame would indicate and is a slimy route runner that can confuse defensive backs.

30 – Kansas City Chiefs select Garrett Wilson (WR, Ohio State) – And immediately after, the next Buckeye receiver comes off the board. Tyreek Hill and Travis Kelce are two of the best at their respective positions, but Kansas City has struggled mightily with finding any level of consistency from other skill position players. Wilson has a high ceiling and is a receiver who plays much taller than his height would indicate.

31 – Cincinnati Bengals select Daniel Faalele (OT, Minnesota) – Its been a magical season for Bengal fans, and while they proved most everyone wrong with opting to select Ja’Marr Chase over Penei Sewell last season, they need to find more help to keep Joe Burrow upright. Faalele is a monster of an offensive tackle from the Golden Gophers, who’s past rugby background shine when witnessing his athleticism.

32 – Detroit Lions (via LAR) select Desmond Ridder (QB, Cincinnati) – With Jared Goff likely back for next season based on cap numbers, Ridder can sit for a season or even spot start when needed in preparation to take over in 2023. I don’t believe Ridder will ever be a top end starter, but he’s drawn comparisons to Ryan Tannehill for his moderate athletic ability and quarterbacking style. Give him a year and continue to build the roster around him.