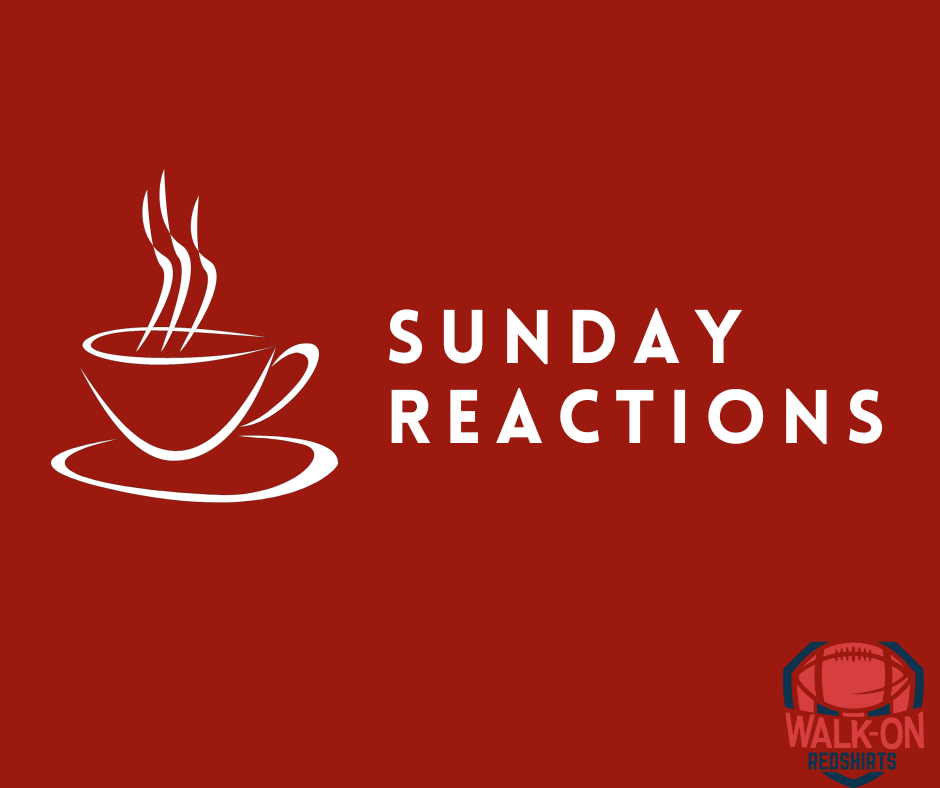 The slate heading into week two did not have the eye popping matchups compared to week one but yesterday delivered as an exciting college football weekend. Teams all around the country still have plenty of questions to be answered but a few teams have started to show their true colors. Each week I will break down reactions from the weekend (I missed last weekend due to a wedding). Heading into week three this is where I currently believe the landscape of college football stands:

The Sun Belt deserves more respect: The Sun Belt defeated Texas A&M, Notre Dame and Nebraska yesterday. Georgia State was tied with North Carolina in the fourth quarter and Southern Miss was down 10-7 to Miami at halftime. Old Dominion defeated Virginia Tech last week. The Sun Belt used to be one of the worst conferences in college football but now they might be better than the American Athletic Conference. The AAC will lose UCF, Houston and Cincinnati next year leaving the door open for a new group of five conference to be the top tier. The expanded playoff will provide a group of five team an opportunity to play in the 12 team playoff every season. The Sun Belt is rapidly improving and could be in a position to take one of the playoff spots consistently.

Texas might be good? Alabama might not be as good?: I did not even consider giving the Alabama vs Texas game the time of day because I thought the Crimson Tide would win by 30. Fair warning, I only saw highlights yesterday because I was the Arkansas State vs Ohio State game. If Ewers had played the whole game, would Texas have won? Bijan Robinson was held in check most of the day forcing Hudson Card to make plays. Bryce Young stepped up when he was needed most late in the game. Young led Alabama down the field and into field goal position allowing the Crimson Tide to win the game. Running backs Jahmyr Gibbs and Jase McClellan will be focal parts of the offense. Alabama’s pass defense concerns me in the long term.

JJ McCarthy should start for Michigan: Jim Harbaugh announced his plan for the quarterbacks before the season began. Cade McNamara would get the first start against Colorado State while JJ McCarthy would start game two against Hawaii. If Michigan is going to have a chance at repeating as Big Ten champion they will start McCarthy from this point forward. McCarthy is 15 of 16 for 259 yards and three touchdowns. He has also added four carries for 66 yards and a touchdown. McNamara did a great job bringing Michigan back to the top of the Big Ten but in order to maintain longevity they need to play the best quarterback. McCarthy gives them a chance to reach the next level.

Marcus Freeman needs to make changes today: Is Notre Dame bad? After watching their game against Ohio State we knew their offense needed work. I predicted this would be a hangover game for Notre Dame but eventually they would snap out of the trance and defeat Marshall. The Fighting Irish offense is pathetic. Notre Dame totaled just 351 yards of offense yesterday against the Thundering Herd. Marcus Freeman’s defense has also been bullied at the line of scrimmage. Notre Dame’s defense was one of the best in the country last year. Yesterday Marshall ran for 219 yards while Ohio State ran for 172 yards on the Fighting Irish defense last week. Marcus Freeman started the season walking with a swagger unlikely any other coach but it is all gone after starting the season 0-2.

It’s time to take BYU serious: Yes, BYU was favored over Baylor. Just because they were favored does not discredit this win. For the fans who fell asleep before the end of the game here is a recap. BYU nearly won the game in regulation but a missed field goal resulted in the game going to overtime. The Cougars eventually defeated the reigning Big 12 champions in double overtime by a score of 26-20. The Cougars play a schedule which could be considered comparable to a power five schedule. BYU plays Baylor, Oregon, Notre Dame, Arkansas and Stanford this season. Should BYU go 12-0, there is no reason they should be left out of the College Football Playoffs. The Cougars have a long way to go but it is time we take them serious as a top team in the country.

Overtime is incredible: Yesterday we had six games go to overtime. None were more exciting than Bowling Green and Eastern Kentucky who played seven overtimes. Eastern Kentucky attempted a hook and ladder play with their tackle in the fifth overtime. Kansas defeated West Virginia by 13 points in overtime which sounds strange because it is. The Jayhawks intercepted a pass from JT Daniels and returned it for a pick six to end the game. Tennessee vs Pittsburgh, UTSA vs Army, Houston vs Texas Tech along with Baylor vs BYU all finished their games in overtime. Extra football is the best football.

Scott Frost will be fired on October 1: Nebraska has given Scott Frost a longer leash than most college football coaches. Last year felt as if the tides were finally starting to turn with Nebraska having a chance to win every game. Yesterday’s loss to Georgia Southern was the final straw. The program is simply not moving in the right direction and the hometown hero is not delivering. Nebraska is a once proud program which has turned into a laughing stock. Frost’s buyout is cut in half on October 1st. Frost could deliver a miracle and beat Oklahoma but it likely will not be enough to save his job. Nebraska has not made a bowl game under yesterday’s loss significantly hurts their chances of making one this year.

Lincoln Riley has USC on the right track: Lincoln Riley took the job at USC and immediately began to utilize the transfer portal. Some of his tactics have been rumored to be questionable after landing Caleb Williams and Jordan Addison. Both Addison and Williams are in line to have massive seasons for the Trojans. USC led Stanford 41-14 in the fourth quarter before a few late scores. Williams looks to be a legitimate Heisman contender after completing 20 of 27 pass attempts for 341 yards and four touchdowns. Addison also had an excellent day finishing with seven receptions for 172 yards and two touchdowns. The USC defense is the biggest concern after allowing 441 total yards to Stanford. Riley’s defenses struggled at Oklahoma and will need to improve at USC to become a serious contender.